Kids, Gender, and Being A Grownup: How Love can Win Over Fear

What do you do when your young son walks over in a flowing dress, smiling and looking at you expectantly?

That moment began my journey as a parent of a gender-non-conforming, or gender-fluid, child. There I was, at a clothing swap in my happy little home with open-minded friends, watching my son fall in love with the feeling of wearing a dress. I myself have never liked wearing dresses — in fact, I kind of hated it. I always resented that I was supposed to wear them.

Since starting the Rainbow Train project, a children’s gender liberation album being released this week, I have heard countless stories similar to mine from teachers, grandparents, friends and parents. They feel conflicted about how to respond to a child’s natural self-expression. In conversations I had before writing and co-writing the Rainbow Train songs, a recurring theme emerged: Children don’t have baggage around gender; we do! The more adults can examine the rules we learned, the more space we can give children to find what psychologist Diane Ehrensaft calls their “true gender selves.”

Seeing my young son twirling in a borrowed dress made it starkly clear that we live in a society which forces people to choose “male” or “female” at every turn — from bathrooms to clothing to government forms. The idea that a person can be both, or neither, is a growing reality in many parts of the world, and is, in fact, an ancient truth. In my favorite film about the indigineous term “Two-Spirit,” we see that before colonization there were many places where a person could be both, neither, or gave themselves a gender when they were old enough to speak. The truth of multi-gendered existence is making its way back into mainstream culture — with places like the University of Vermont recognizing a third gender, and this very sweet and useful video by gender-non-conforming youth in Australia called “What Are Pronouns?”

But there is a disruptive force pushing back against the exhilarating progress we are making: bullying.

Bullying has been a popular topic in schools and parenting blogs, especially after bullying-related youth suicides — of which there have been far too many, especially trans youth. A large percentage of bullying in schools currently is based on gender presentation. The response to Olympian Bruce Jenner’s recent announcement that he will be transitioning out of his assigned gender has unleashed a clear stream of unresolved feelings many adults have about gender, and the panic they feel when challenged to re-examine the rules that raised them. Even New York Times family blogger KJ Dell’Antonia acknowledges her discomfort in speaking with her child about Jenner’s gender identity.

Anti-bullying conversations and curricula sometimes “wimp out” by avoiding uncomfortable questions, like “How do I feel about a boy wearing a dress?” or “What are gender norms? Do we have to follow them? How do I treat someone who doesn’t fit into my worldview?” in favor of non-threatening universalisms like “We are one community,” and “No place for hate” which, while true, do not always push adults or children to get to the heart of the matter — and therefore avoid the tough conversations that lead to social change.

Children are spiritual and ethical beings, just like adults. They are keenly able to synthesize ethical questions — “How do I treat someone who is different from me?” — with spiritual realities — “Every person is holy. People who make me uncomfortable or confused are holy. Every person deserves a chance to grow into who they need to be.”

While sharing Rainbow Train songs and curriculum recently at an early childhood educator’s conference, I included a “self-challenge”: How do I feel around people who are different than me? What are some parts of me that don’t fit into one category or another? We as adults need to answer questions for ourselves so we can help guide children through these challenging waters. In this way, we make space for the gender liberation movement that is upon us.

Looking at my son in a dress, I wondered: what would it be like to see someone with “two spirits” and know that they are holy — and know that they are safe? I vowed to help create a world where this is true. I wrote this song, “Holy,” for my child and for the hundreds of other families I have met who have lived that moment and need the world to change — like my dear friend Courtney Mandryk, who created this powerful series of images for the song, which lays bare the innocence in her child’s gender experience.

Back to the moment that began my journey: I have a decision to make about all the voices in my head. I take a deep breath, look at his sweet face, and tell him he is beautiful. Because he is.

Chana Rothman is a Philadelphia-based singer/songwriter, musical community organizer, and educator.  Join her this summer for a special jkidphilly summer series! 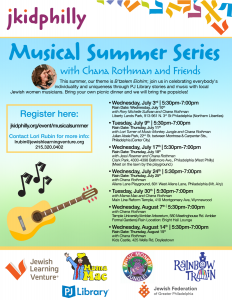 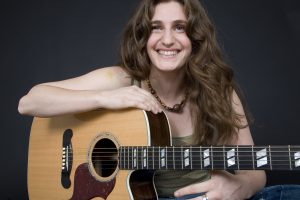