‘B’tzelem Elohim’– Striving To Be Our Best Selves

As the child of a Jewish atheist father and a culturally Jewish mother, I grew up with a very casual relationship to Judaism. We attended High Holiday services in a rented space run by a hippie cantor and didn’t belong to a congregation until I was 13. My family was firmly on Team Science in the “Science vs. God” discussion on creation and I never learned a single Torah story until I started teaching them to kindergartners and first graders three years ago. So, you can imagine my initial dismay and then dilemma when I heard that I’d be teaching B’tzelem Elohim all year to a class of 5 and 6 year olds.

B’tzelem Elohim is, literally translated, “created in God’s image.” How was I, a strong believer in evolution, going to preach to my class about creation? And, further, how was I, a strong believer in God not being a “thing” or a “person” going to explain God’s “image”? It’s fair to say that I actually panicked a little about this as the beginning of the Sunday school year drew closer.

(Throughout the year, my class worked on creating a page of Talmud that sought to explain B’tzelem Elohim in their own words. This was their final project.)

I had a friend once tell me that the Internet was my religion — that I believed in it more than anything else and, in this case, my faith proved to be my savior. I started googling. I pinterested. I facebooked. I read articles from all branches of Judaism about B’tzelem Elohim until I finally found a way that I could embrace the concept. And once I did, our class had an amazing year of learning.

We spent many weeks in the fall and winter discussing what God is like. Not what God looks like, but what God is. God is tolerant. God is kind. God is unique. God is special. And now, after a year of study, my young students will tell you that yes, B’tzelem Elohim means “created in the image of God” but it really refers to how we can be like God. This is the concept with which we grappled all year and with what we will all — myself included — continue to grapple for the rest of our lives.

B’tzelem Elohim does not, actually, have to be about the creation itself at all. It can be about striving to be our best selves. About loving ourselves for who we are, where we are. Recognizing the goodness and benevolence in others and seeing the same when we look in the mirror. B’tzelem Elohim is learning about one another and being patient and tolerant as we do. Recognizing difference and embracing it. Like God. B’tzelem Elohim.

Editor’s Note: We’re excited to bring you a jkidphilly summer music series on the theme of ‘B’tzelem Elohim’! Check our calendar for events near you.

Originally from Boston and having earned a B.A. from Wheelock College and an M.F.A. from Emerson College, Robin is a jkidphilly parent who also teaches the K-1 Bonim class at Temple Sholom in Broomall. She lives in Media with her wife and their 10-year-old son. 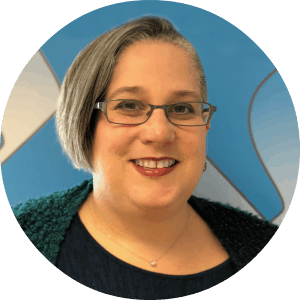