My Reflections on Being JOC in 2022

Jewish Americans often aligned with African Americans in the social justice fight in protest, coming from a place of shared oppression. In the present day with synagogue bombings and other targeted attacks on Jews, it is a hard line between oppressed and what is considered American racism. Whoopi Goldberg was recently suspended by her network for saying the Holocaust did not have to do with racism, and was white on white crime. You can watch and read more about the conversation on PBS here. Is this an American thing to say? And how does race politics play into this when the Nazi propaganda declared Jews an inferior race?

Being Black and Ashkenazi Jewish means I have generally felt “other” most of my life. It means I have felt out of place most of my life with either side of my family. I have felt often that I am only really understood by JOC, Jews of Color. A good friend of mine, a JOC, was told recently that she “got it from both sides,” from her white Ashkenazi Jewish cousins. That because she was Black and Jewish she really was a target of oppression. But Jewish is not always evident in people’s appearance, which she struggled to articulate to her family members. Can we really compare our oppression? Antisemitism still exists, but if you can’t tell someone is Jewish, does it hit the same way? And is believing that Israel should not belong to one group of people antisemitism? This is where the conversation with my friend came up with her family. 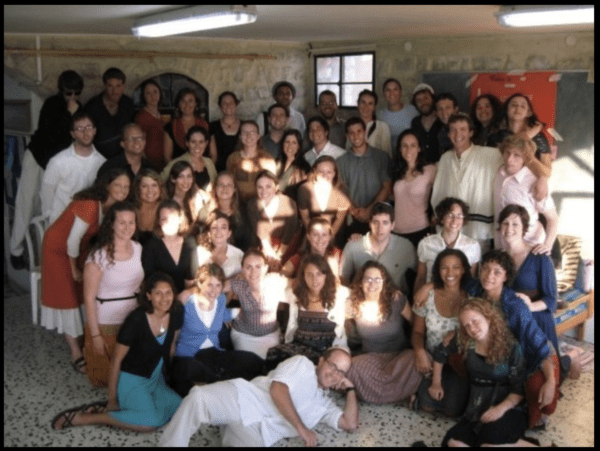 Sarah in Tzfat, Israel in 2008 on birthright, making fast friends with another JOC.

I, personally, after having visited Israel and seeing what it was like and how people interacted at the border, strongly believe that the land belongs to God, not one group of people. When you have fought for something for so long, why would you want to share it? Especially if it feels like you are losing it. This could be compared to other “purification” of cultures in the past, eugenics for instance. Why would the oppressed take on this role of the oppressor? What does it mean to unpack white privilege with a group of people that identify so strongly as still being oppressed?

I am fully aware of how loaded this conversation is, that after being exiled and targeted that a land to call home is extremely important, but at the risk of ostracizing another group of people? The border conversation is sticky, because of funding, and land rights. It is not specific to the Middle East. But the importance of home is important to people across the world. What does it mean to be migratory when there are border police and checkpoints?

I do not have all the answers to these questions, but what I do know is that being Black and Jewish, specifically Black Caribbean and Jewish, I have had to find a tribe of my own. Living and visiting the Middle East and the Caribbean, searching as much as I could for my ancestry has been important to helping me find home in my own skin. I have looked for outlets for my family’s own trauma inheritance.

As author Sobonfu Somé discussed in a workshop that I attended at a weekend retreat at Spirit Rock meditation center on grief, most families have one person who is overweight, carrying the weight of their family’s grief. As a population we are not taught how to release this grief we carry, how to pray to the ancestors to take the pain off of our shoulders so that we can fully live here in the present. Art forms are one way I have learned to transform that pain or oppression that still feels very present.

Movement, visual arts and music have a long history of transforming pain. The parody “Black and Jewish” (video has explicit content) as jkphilly’s Julia Weekes puts it “… took cultural/racial tropes and made them their own (big butts & big noses, for example). I think it’s valuable for white Jews to not be the judges of how non-white Jews, in this case, Black Jews, claim and express their identities. What it reminds me of, in white Jewish culture, is how Jews have used humor and art to deal with painful topics.” Look at this long list of Black Jews who have made a living off of music, acting and other.

I hope you can include a variety of experiences for your family with a multitude of colors, recognizing Jewish does not mean one color, or one mentality. We as a population could all benefit from a large dose of empathy and compassion for one another.

Sarah Kolker is a graduate of Sarah Lawrence College and Moore College of Art where she got her Master’s in Art Education. She grew up making art in after school and summer programs. Teaching art since 2004, she has continued making and teaching art to youth of all ages.  Her personal passions have brought her to study health and wellness practices in Jamaica, the San Francisco Bay Area and New York City. Kolker currently teaches with Mural Arts in Philadelphia, also her hometown, which is the nation’s largest public art program that engages the community to ignite change through mural-making.