Whether you are looking for videos, crafts, explanations, or more, jkidphilly is your one-stop-shop for all things Lag B’Omer. 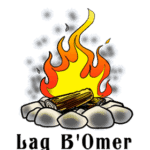 Come for the bonfire;

stay for the fun opportunity to be active outdoors!

Lag B’Omer is a playful Jewish holiday that takes place in the springtime. Using gematria, a system of associating each Hebrew letter with a number, the letters of “Lag” add up to 33. “B’Omer” means “of the Omer,” the Omer being the forty-nine day period between Passover and Shavuot. Thus, Lag B’Omer is the thirty-third day of this period.

Lag B’Omer is traditionally celebrated with festive picnics and bonfires. It’s also a time for weddings and first haircuts. The Talmud, an ancient source of Jewish law and custom, says Lag B’Omer celebrates the halt of a plague that took the lives of thousands of students of the great teacher Rabbi Akiva. Other sources say Lag B’Omer celebrates a victory for the armies of the Jewish leader Bar Kochba. Some associate Lag B’Omer with stories about Rabbi Shimon Bar Yochai, a student of Rabbi Akiva and writer of an important Jewish text.

Lag B’Omer is sometimes called the scholars’ holiday in honor of the sages who braved harsh Roman punishment to teach Torah. Stories tell us that eager students pretended to go on outings or go hunting in order to find hidden learning places. Bows and arrows are therefore part of many celebrations.

Everything you wanted to know about Lag B’Omer — and more!

Crafts and games for a super fun Lag B’Omer

Celebrate Lag B’Omer with your stomach!

Videos for all ages

Sing a song for Lag B’Omer!