The Value Of Jewish Summer Camp

Editor’s Note: Do you send your kids to Jewish summer camp? Are you thinking about it? We thought it might be helpful to hear from a young adult who attended Jewish camp as both a camper and counselor about the benefits of his years at camp.

The last twelve summers of my life were spent in the same place: Camp Ramah in the Poconos. Within this time I have collected nothing short of a life times worth of happiness, personal growth, and long lasting, true friendships. The experiences I had throughout my summers at Ramah have shaped my identity as a young Jewish man. Before attending my first summer, I had never participated in any Shabbat traditions. As most would imagine, convincing a child to get rid of technology and attend services for a day is no easy task. However, by the end of my first summer I wanted to take home the traditions of Shabbat at camp, and continue them throughout the year with my family. My summers made Judaism and its traditions meaningful, and even fun for me and other children exploring their Jewish identities. Additionally, the education I received from my experiences there have taught me more about myself than any other entity possibly could. I was forced to become the truest version of myself by being immersed in an environment that naturally encouraged me to thrive. This began with the fact that every morning from ages nine to sixteen, I woke up next to the faces of the same twenty boys who were all on the same journey as I was. These are the people who have come to know more about me than anyone else in the world, and have made me want to become my best self.

The relationships I have developed from this community are the strongest, and most genuine connections I have. Camp allowed me to seamlessly find ways to bond with others that would not be considered normal in most settings. This is best articulated by a story from my final summer. One night, the power went out in the area. The normal reaction to this may have been to stay inside, watch a movie, or maybe tell a scary story. We could have done any of these things, but instead, we decided to sing. Not only did we sing, but we sang outside, and we even sang Hebrew songs that camp had introduced us to. As we continued to sing, everyone else began to sleep. The later it got, the more passionate our singing became. This instance brought us together by giving us the opportunity to make each other feel warm and safe in what is normally a time to worry. Whether it was singing, competing, or any other group activity, we became the instruments that united us everyday. These friendships became the most important things to us, and now as adults, we have begun fostering these same relationships of younger people. 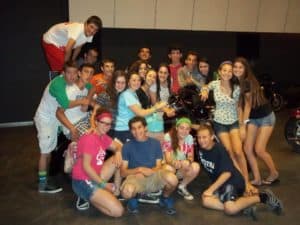 Noah Averick is a rising senior at the University of Pittsburgh. This summer, he served as an intern for Jewish Learning Venture.