February, 2000. Kaiserman JCC. Super Sunday. This was where we met and what ultimately, became the foundation on which our relationship developed. For more than fifteen years, my husband and I have reflected on this “chance” meeting as not really one of luck at all, but rather of bashert (destiny). Giving back to our Jewish community – giving tzedekah –  was and is a core value for us as individuals, as a couple, and as a family.

When discussing how we would celebrate our son, Harrison’s, second birthday, we were excited to throw him a birthday party with family and friends. He was “obsessed” with fire trucks at the time and would visit our local fire station pretty regularly. How fun would it be to surprise him at his party with a fire truck and give everyone the opportunity to get on the truck with a shiny new fire hat?! After all of the party planning began to take shape, we realized that his birthday presented us with another opportunity, an opportunity for our family and friends to make a donation – to give tzedekah – in lieu of gifts and in honor of his special day. That was eight years ago.

We have been blessed to have celebrated many birthdays with both of our children over the years and each time have asked for family and friends to make donations – now of the kids’ choosing – in lieu of gifts. They find something that’s meaningful to them, whether collecting chapter books for Cradles to Crayons and outdoor games and toys for Camp Harlam, and this year, sports equipment for the North Hills Community Center and Barbie dolls for the Mitzvah Circle Foundation.

We will continue to practice this ritual year after year, and combined with other opportunities to give back, hope we instill in our children the true meaning and value of tzedekah. 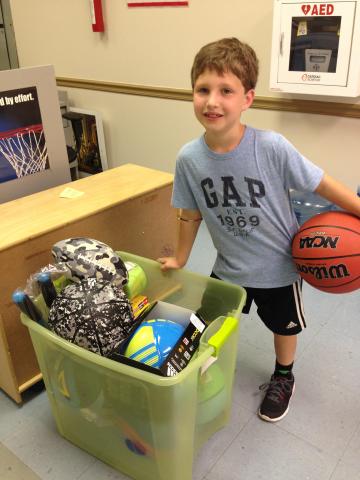 Rachel Steinberg lives in Fort Washington with her husband, Matthew and children Harrison, 8 and Liv, 5. They are members of Congregation Beth Or in Maple Glen and are actively involved in the Philadelphia Jewish community.