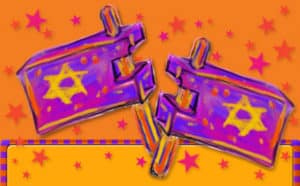 King Ahashverosh loved to give big parties in his palace. One night, he gave a big party and wanted Queen Vashti to dance for his guests. Vashti did not want to dance, so she sent a message that she would not attend the King’s party. “Nobody says ‘No’ to the King,” said an angry Ahashverosh, “Vashti will no longer be my queen!” And Ahashverosh sent Vashti away from the palace.
King Ahashverosh sent messages throughout his country calling all young women to the palace so that he could choose a new queen from among them. One young lady was a Jewish girl named Esther. She did not want to go, but her cousin, Mordechai, said she must. “Perhaps some day you may be able to help the Jewish people,” suggested Mordechai. The King chose the beautiful and kind Esther to be his queen.

The King had a chief assistant to help him with all his important work. His name was Haman. Haman was a selfish, mean and greedy man. He would walk down the streets and tell everyone to bow down to him. People were afraid of him so they bowed down to him as he ordered.

But there was one man who refused to bow down. “I won’t bow down to any man,” he said, “I bow down only to my God, and Haman is not my God.” This brave man was a Jew named Mordechai and Haman did not like him. Haman decided to punish all the Jews because of Mordechai. Haman did not know that Queen Esther was Jewish.

One day, Mordechai was standing outside the palace walls when he overheard two guards whispering about harming the King. Mordechai let the King know about it and saved him. The King was thankful and wanted to reward him. He gave Mordechai his best clothes to wear and told Haman to lead Mordechai through the streets of Shushan on the King’s beautiful white horse. This made Haman even angrier and more determined to punish all the Jews.

One night, Esther invited the King and Haman to a party. She told the King that Haman wanted to hurt her. “I don’t want to hurt you,” exclaimed Haman, “You are my Queen.” “Well,” responded Esther, “you want to hurt the Jewish people and I am Jewish!” The King was shocked. He took Haman’s job away from him and gave it to Mordechai. The Jews were very happy. They sang and danced and gave big parties.