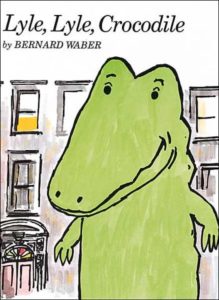 Lyle the crocodile lives in a house in New York City. He likes it there, and his hosts, the Primms, like having him around–he helps young Joshua with his homework, jumps-rope with the neighborhood kids, and browses through antique shops with Mrs. Primm. Much to the affable reptile’s dismay, however, he makes his neighbor’s cat Loretta crazy, which in turn makes Mr. Grumps, Loretta’s owner, even crazier. One day, Mrs. Primm and Lyle are shopping, when Lyle–through no fault of his own–ends up infuriating department-store bigwig, Mr. Grumps. Poor Lyle gets sent to the Central Park Zoo where he misses living with the Primms. In an elaborate sequence of events, Lyle finds himself back home, a neighborhood hero, and, startlingly, even a friend to Mr. Grumps and his cat.

JEWISH VALUES IN THE STORY:

Gemilut Chasadim: Acts of Loving Kindness
In the book, Lyle does many acts of gemilut chasadim: helping Joshua do his schoolwork, sharing food with the birds, and helping Mrs. Primm in the kitchen.

Ometz Lev: Courage
Lyle becomes a neighborhood hero when he runs into a burning building to save Mr. Grumps and his cat. In doing so, Lyle thinks of them before himself–and does an act of courage.